elihunter said:
I've had this Omori boost gauge for years and left the backlight disconnected because it's way too bright. I always wanted it to be like factory and work with the dimmer. I ran across this but it didn't work with the factory dimmer Dimmer circuit details.

After way too much time I figured out the MR2 is using PWM on the ground side of the cluster lighting. Since the Omori gauge doesn't have a separate ground for LEDs this makes it difficult.

What I ended up doing was using an Adafruit Feather Proto M0 with a high side PWM control using a transistor and MOSFET.
I also input the PWM signal from the cluster illumination to a digital input on the Feather to read the position of the dimmer.
This creates a problem for full on and full off though so I also connected the same line to an analog input which would read 0 when the lights were supposed to be fully dimmed.

I'm using this with PrimeMR2's LEDs for the gauge cluster. I tried mapping values for brightness to get them even at different settings for the dimmer and luckily it was linear. If you're using different lights you'd need to calibrate it for your lights.

The MPM3601 has a max input voltage of 21V. I'll probably add some input protection on this in the future but hopefully that's enough of a range that it doesn't get damaged from voltage spikes. The MPM3601 does have some protection built in but it's not made for automotive use. Also note the Feather's on board voltage regulator needs to be disabled by connecting the EN pin to ground.

I removed the board in the cluster that was for the OEM gauge, the Feather is just about exactly the same width and will fit in the same location.
There's not a whole lot of space on the feather, I'd also added a variable resistor thinking might need it but found it wasn't needed. And yes the transistor is sticking way up, the datasheet I had had the leads reversed and that was the best I could do without taking off other parts.

And here's the code for the Arduino

My cell phone camera was horrible for this 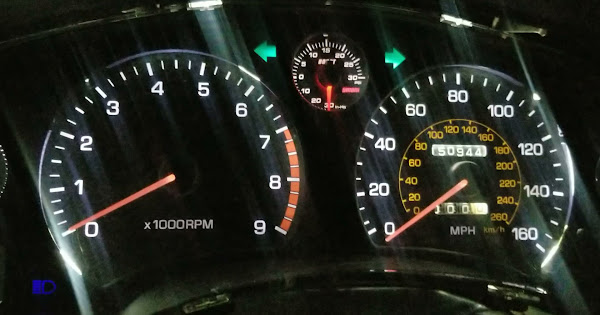 Any questions or suggestions for improvements let me know!
Click to expand...

I just hooked up the Omori wires to the cluster back light and when I dim it with the OEM knob, the Omori dims too. The only issue is, if I dimmed 50%, the Omori will reset itself which the needle will swing up and down non stop til I turn up the light. I’m pretty happy with the result.

elihunter said:
I'm guessing you used the illumination ground to power the gauge? If it works for you that's great.

To be clear I do think this is totally overkill just to dim a light and I spent way more time on this than I planned on but I'm incredibly happy with the results now and figured I'd share.
Click to expand...

Yes, the illumination ground. You are correct. I do not have the brain to work with adafruit.
1 - 2 of 2 Posts
Join the discussion
Continue with Facebook
Continue with Google
or sign up with email
About this Discussion
5 Replies
3 Participants
Last post:
elihunter 8 d ago
MR2 Owners Club Forum
A forum community dedicated to Toyota MR2 owners and enthusiasts. Come join the discussion about performance, modifications, troubleshooting, turbos, maintenance, and more!
Full Forum Listing
Explore Our Forums
3SGTE Turbo MKI, 84-89 NA & SC MKII, 90-99 NA & Turbo 1990-1999 MR2 Parts Swapper Show & Shine
Recommended Communities